A flyer threatening to criminally prosecute nearly 200 homeless people living in Columbus Park sent many longtime residents scrambling—but the city says it was all a misunderstanding.

Living in the crash zone of an airport flight path has its downsides, like constant threat of eviction—but the unhoused residents of the 40-acre plot of land in San Jose say the stability and community they find there is worth the risk, so far.

The latest warning to circulate through the park came Wednesday with flyers taped on vehicle doors and stapled to belongings. The flyers threatened that anyone trespassing would face criminal prosecution.

But Daniel Lazo, spokesperson for city Parks, Recreation and Neighborhood Services, said no one would be evacuated from the land and that the flyers were misunderstood.

“For the cleanup at Spring and Taylor, no person’s encampment is being abated,” Lazo told San José Spotlight. “The city is legally obligated to post these notices at specific sections that require trash and debris removal, including burnt down and abandoned tents at the site.”

The confusion over the flyer comes as San Jose faces calls from the FAA to clear the growing homeless camp.

Rudy Ortega, a homeless resident living in Columbus Park, said he found the trespassing notices stapled on two of his suitcases at the edge of the encampment.

“(The city) came down and just started stapling the flyers on random things,” he told San José Spotlight. “If there’s one thing they need to work on, it’s more communication from them. The flyer looks exactly like a sweep notice.”

Lazo said his department recognizes the flyer caused some confusion among homeless residents and said they’re looking at the language used in the notices.

A coalition of homeless advocates called on the city to differentiate between cleanup and sweeps notices. They also demanded the city translate flyers into Vietnamese and Spanish.

“If they don’t want people to think it’s a sweep then they should at least use different colors,” said Shaunn Cartwright, a longtime homeless advocate.

Advocates also called on City Hall to meet with Columbus Park residents and come up with a plan to relocate them.

Police officers have threatened to charge Columbus Park residents with criminal trespassing in the past but didn’t follow through, according to three residents who said they’ve been detained by San Jose police.

Other homeless residents in Watson Park have received trespassing citations from San Jose police officers, though the citations were later dropped.

As the most recent trespassing warning spread through the encampments within Columbus Park, some people living along Spring Street fled in fear of a coming abatement.

“The (Federal Aviation Administration) are the ones going down on the city to hurry and clean this up. Now the city has to see what to do with everybody,” said encampment resident Lisa Negrete. 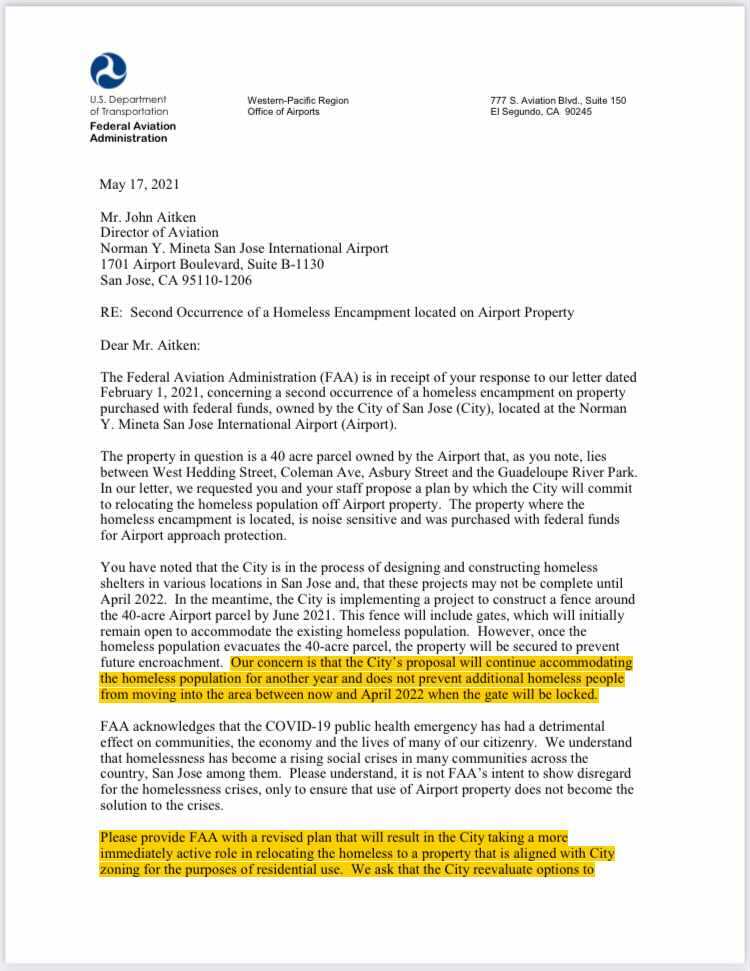 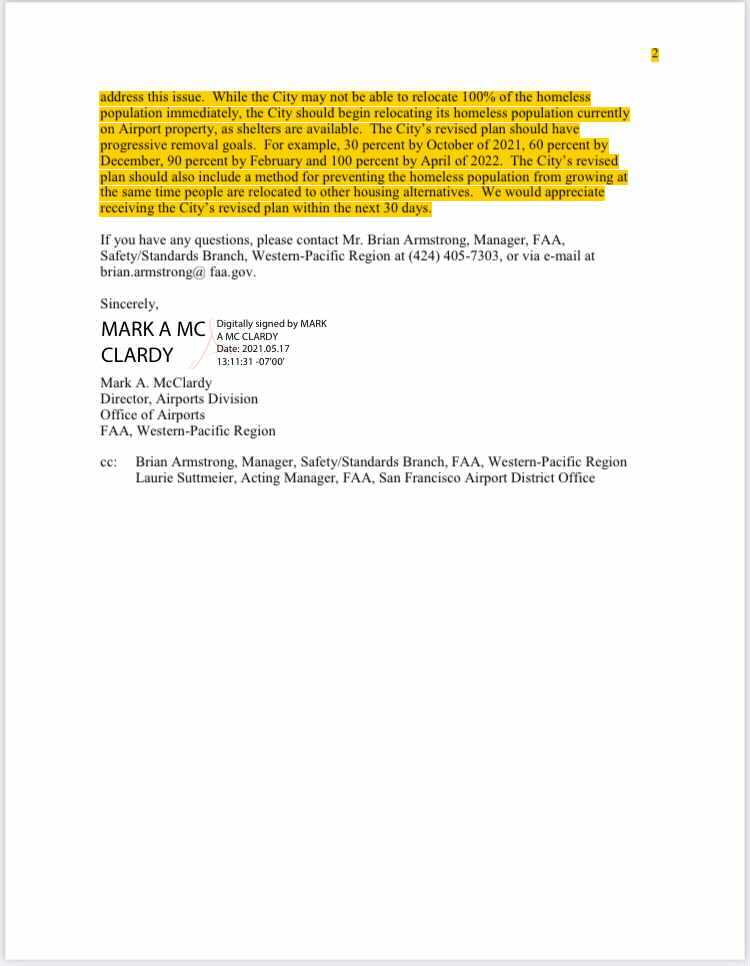 In a May 17 letter to aviation director John Aitken, FAA officials demanded the city remove homeless residents off the land for good.

“Please understand, it is not the FAA’s intent to show disregard for the homelessness crises, only to ensure that use of Airport property does not become the solution to the crises,” the letter says.

According to the letter, the city planned to build a fence around the 40-acre site by the end of the month. The city would leave the gate open for existing homeless residents but close it once they relocate to “prevent future encroachment.” FAA officials worry this will allow more homeless people to move in.

While the FAA letter notes San Jose might not be able to relocate everyone into housing, it says the city should have “progressive removal goals” and have everyone removed from Columbus Park by April 2022.

Airport spokesperson Keonnis Taylor told San José Spotlight the airport will come up with a plan balancing the needs of the unhoused residents with demands to clear the site.

“At this time, no actions have been taken, as the city is still developing plans in accordance with FAA requirements,” she said.

Taylor did not respond to further inquiries about the status of the fence, or future abatement notices.

Workers with BeautifySJ, the city’s trash removal initiative, posted two other flyers Wednesday notifying people of the upcoming trash collections. Tucker Construction will collect trash from the area through July 17.

“There’s another notice posted on the RV in front of me that said there was only going to be a clean up today, but I’ve seen another (flyer) on trespassing,” Kesler said. “I just wanted to know which one I should be following.”