High-rise developments are flowing through the construction pipeline in downtown San Jose, fueled by investor money and tax incentives—and it’s going to be that way for the next few years.

The spur in development is due to opportunity zones, economically challenged areas where investors can receive federal tax breaks for putting money toward revitalization. While the pandemic slowed construction in some areas, San Jose’s downtown opportunity zone is thriving and its development projects are on track, officials say.

There are 11 opportunity zones across the city, including parts of downtown and the Monterey Corridor industrial district.

“Downtown has clearly seen the most interest and the most investment,” Nathan Donato-Weinstein, business development officer for the city, told San José Spotlight, adding that little development occurs in opportunity zones outside of downtown. 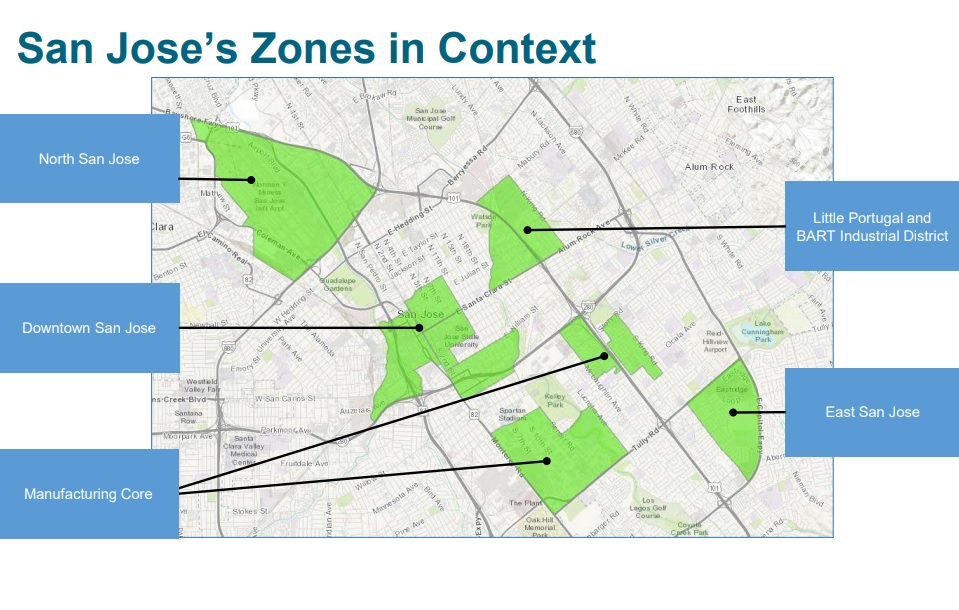 Opportunity zones are meant to encourage development in neglected areas, which could in turn create jobs and housing. Investors can receive significant tax breaks, and there are also incentives for businesses who relocate or expand in opportunity zones.

“If you want to bring a car factory to our area, we have industrial land where you can do that,” Donato-Weinstein said. “That creates jobs… from an equity standpoint, that could be a huge thing.”

Urban Catalyst is one company dedicated to investing in the downtown opportunity zone. Just last week, the firm announced six of its seven projects are either in the late planning stages or in the case of the former Camera 12 building, under construction. A seventh project, Icon/Echo, is in the fundraising stages.

“We feel like being an integral part of the community sets us apart from other types of funds,” Erik Hayden, co-founder of Urban Catalyst, told San José Spotlight. “We’re our own developers. We understand what the community is about, and are able to create projects that fit into the community.”

That includes projects such as Keystone, a hotel planned near Google’s Downtown West campus, which Hayden and co-founder Josh Burroughs say will generate at least $1 million annually in tax revenue for the city.

Other projects include revamping the historic Fountain Alley building to feature offices, retail and restaurant space, a multi-family apartment project and senior living center at Downtown West and a high-rise apartment building a block from San Jose State University. Investments for this group of projects total $131 million from 356 investors.

Opportunity zones also offer individual investors, who don’t have as much capital as big developers, a chance to put their money into projects.

“It’s not multi-millionaires or anything like that,” Burroughs said. “People from all walks of life get to participate in the revitalization of downtown.”

The program is the result of the Tax Cuts and Jobs Act of 2017. As of this year, there are 8,764 opportunity zones across the country, including 879 in California.

To qualify as an opportunity zone, a neighborhood must have a poverty rate of at least 20% or a median family income less than 80% of the regional or statewide median income. Citywide, San Jose’s poverty rate is 8.7%.

To receive tax breaks for development, investors must use Qualified Opportunity Funds, which place money in opportunity zones either through property or a business. Investors can avoid paying capital gains taxes for seven years as a result, and taxes are waived if they hold on to the investment for 10 years.

With one fund for its first round of projects, Urban Catalyst launched another fund earlier this year for Icon/Echo, a high-rise development featuring 300 units of multi-family housing and 420,000 square feet of office space. It’s envisioned as a walkable living space and transit hub near the city’s planned BART station downtown.

In the early stages, Hayden said some investors were confused about how the program worked.

“In their minds, confusion equaled risk and some of them chose not to invest in this type of program,” he said. “Since then, fundraising has gone better.”

According to Burroughs and Hayden, Urban Catalyst started getting more investors once the idea of opportunity zones became popular in January 2019. Investing took a hit because of the pandemic, but COVID-19 didn’t seriously affect development timelines since most projects are still in the planning stage.

“Our plans are still what they always were,” Hayden said. “Creating this win-win: A win for our investors and a win for our community, building the types of projects our community wants and needs.”

Mostly undeterred by the pandemic, Hayden believes the investments will pay off with more walkable neighborhoods, transportation hubs, urban development and new businesses.

“Whether you’re eight years old or 80 years old, everyone should have access to downtown,” Burroughs said.